“Thank you so much. You are the first person able to help me understand her needs after she got ill. I couldn’t have achieved this without your help.” – a husband of a patient
“I only feel secured with the eye tracking device. Thank you so much for developing such useful tool. It is very helpful.”– a patient who suffers from brain stem stroke
Even though the husband knew that his wife, who suffered from general paralysis, could not move her body at all, he would put her in front of the TV every morning before he went to work in order to let the TV programs accompany her during those lonely days. Three years passed, last year, she started to use Eyeplayer eye tracking mouse. She used her eyes to control the cursor and the keyboard and “talked” for the first time ever since she got ill. “Hubby, could you help me put on the eye glasses in the drawer.” 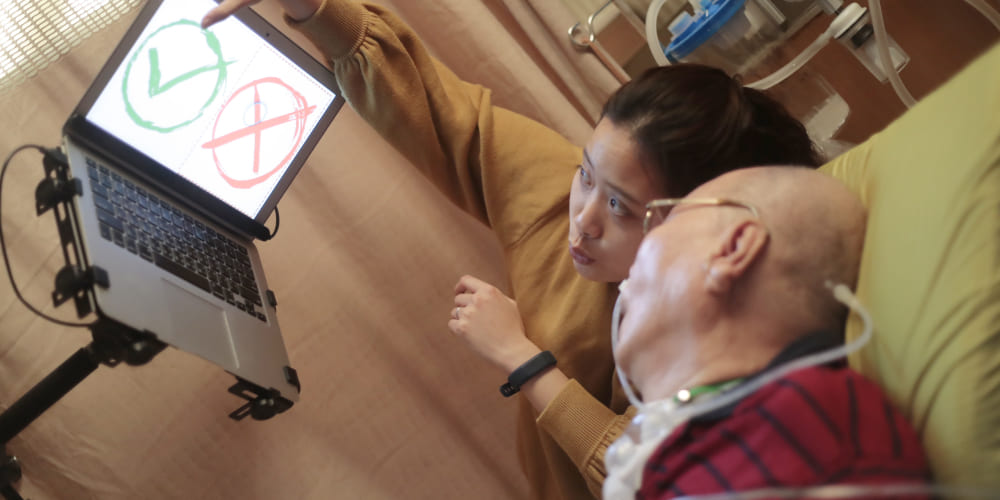 Eye tracking software is the best gift for Dad

Uncle Chang did not have unhealthy habits and he loved to exercise. But he got a stroke when he was 76, and it was the most severe form of stroke, the brain stem stroke. The body parts below his tongue became paralyzed. He lost his ability to speak and move. He was almost like in a vegetative state. His nurse and family members started to feel pessimistic over time.

After lying on the bed for ten years, his daughter, who always believed that her dad still had consciousness, proved her belief with the use of 1246 Doctor Patient Communication software. The eye tracking instructor soon found out that Uncle Chang would become significantly more focused when a picture of his family members was shown. “In order to let Dad feel interested in using the software, we started to shoot videos and add them into the software system. We could even greet Dad and share our life with him.” His grandson who lived overseas did a talent show for him and introduced him his girlfriend. Sometimes he also shared the pictures of his trips and of Canada in different seasons. The family members became united while collecting all these materials together. This was an unexpected gift for the family.

“I wish Dad could live a happy life. I want to let him know what our life looks like, what the world has become of. The eye tracking lessons and software were the best gift for Dad.” 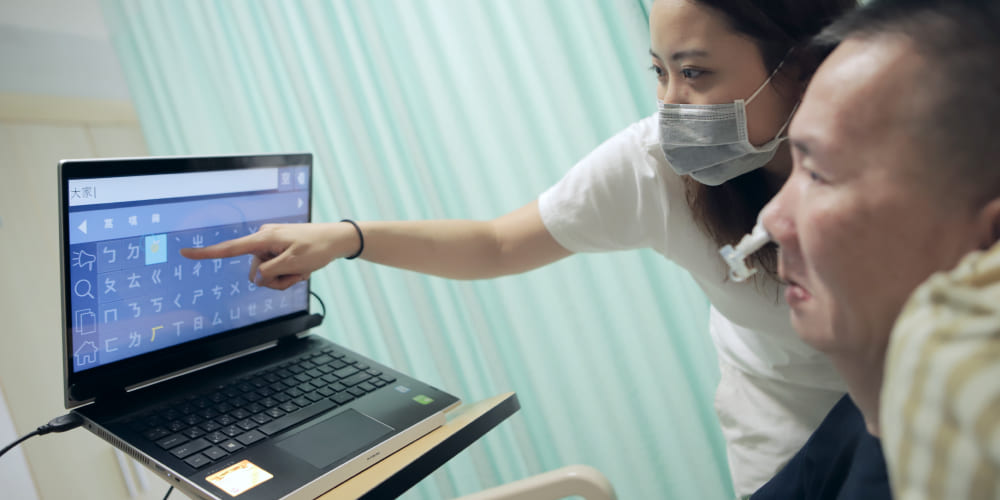 I love you with all my eyes

“The doctor said his brain waves were flat. But when I was talking to him, I felt he was trying to tell me something through his eyes. His hand would tremble slightly. I just wanted to try.” This is the request we received. When SENSE Team arrived at the hospital, the doctor saw Mama Ding, and he acted like he knew her well. He even joked around and said “What challenge are you bringing to me this time? Will there be any effect?”

Uncle Ding was 65, after he got blood cancer, his medical conditions worsened quickly. Within half a year, his whole body could not move anymore. We tried to use EyeJoy games to interact with him. Surprisingly, he was able to play games, watch videos, using 1246 Doctor Patient software, and choosing flashcards on his own with his eyes. Uncle Ding gradually improved as he took more eye tracking lessons. His goal was to purchase his own eye tracking device and use it at home in order to communicate with his wife.

When SENSE Team asked Uncle Ding whether he wanted to talk to his son or wife, he chose his wife. When asked what he wanted to say, through his eyes, he said “I love you darling.”